Give J. Irwin Miller credit for both achievements.

As chairman and CEO of Cummins Inc. from 1934 to 1977, Miller turned an unprofitable Indiana-based business into a global leader in diesel engines and related technology that today reports net income of $1.65 billion a year.

As a philanthropist and man of faith, Miller took seriously his company’s obligation to improve its community. He founded the Cummins Foundation in 1954 to support worthwhile projects in his city and later to promote good causes in places where Cummins did business.

His most visible legacy was the architecture program, a public-private partnership through which the foundation funded design fees of public buildings – if they were designed by leading architects.

Thanks to that investment, Columbus — population 45,000 — has 70 buildings and artworks by such masters as I.M. Pei, Eliel Saarinen, Eero Saarinen, Richard Meier, Harry Weese, Dale Chihuly and Henry Moore. “This is a pilgrimage place,” says architect Will Bruder of Phoenix, who visited Columbus in 2012 for an American Institute of Architects conference on design excellence.

Miller’s idea grew out of a building project that took place at his own church in the early 1940s. The First Christian Church had outgrown its space and wanted a new structure that was not traditional. The building committee approached Eliel Saarinen, a native of Finland known for his work at the Cranbrook Institute of Architecture and Design in Michigan.

Initially, Saarinen turned down the offer but a personal appeal by Miller persuaded him that the congregation was open to something radically different. Completed in 1942, it was the first contemporary building in Columbus and one of the first modern churches in the United States.

In the 1950s, Eliel Saarinen’s son, Eero, famous for the St. Louis Gateway Arch, designed three radically different structures for the Miller family: a vacation home in Canada, the Irwin Union Bank and Trust and the Miller residence. The latter was notable because of its collaboration between Saarinen and interior designer Alexander Girard and landscape architect Dan Kiley

The public architecture initiative was prompted by the post World War II baby boom that necessitated new schools. Hoping to discourage bland institutional architecture that characterized typical school buildings, Miller proposed a novel relationship with the school board. His foundation would pay for the design of Schmitt Elementary if the school corporation would pay for construction. The results delighted everyone, and the program expanded to cover other public buildings, landscape and streetscape projects.

Even the county jail was built with livability and aesthetics in mind. Designed by Don Hisaka in 1990, it is made of brick and Indiana limestone – complementing the nearby courthouse – with a recreation area covered by a wire-mesh dome.

Seventy-five years after Miller lured the Saarinens to town, Columbus remains committed to his vision. The Mill Race Center, offering senior services, is a recent example. Completed in 2011, the curving brick design by William Rawn Associates of Boston takes advantage of natural lighting with views of an adjacent city park.

The Columbus Area Visitors Center offers a variety of tours of Columbus’s architectural landmarks, including the Miller home and gardens, which were donated to the Indianapolis Museum of Art by the family after Mr. and Mrs. Miller’s deaths.

Directions: The Columbus Area Visitors Center, starting point for architecture tours, is at 506 5th Street in downtown Columbus. The First Christian Church is at 531 5th Street. 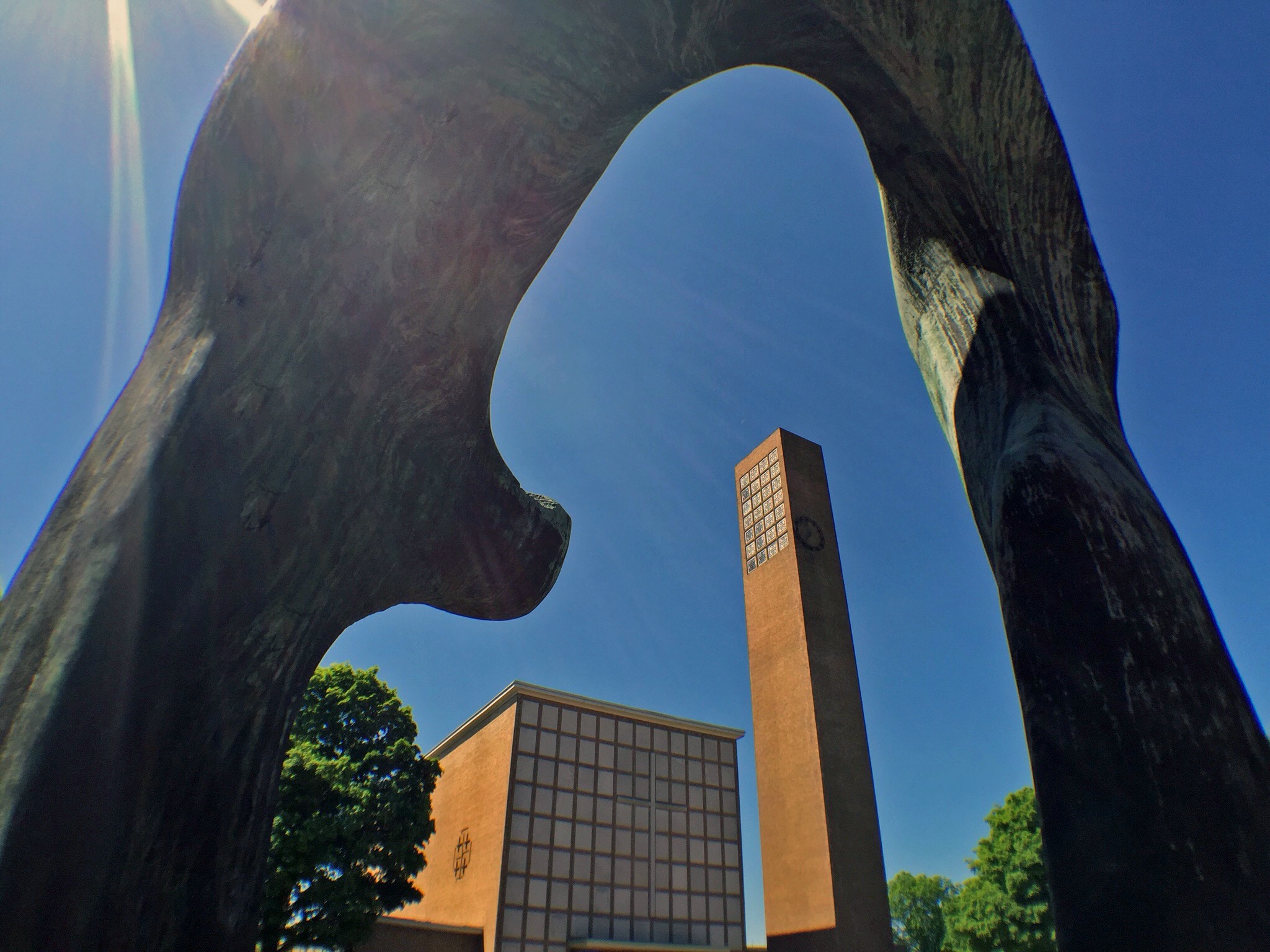