In 2003, Capitol Broadcasting in concert with the city of Durham, North Carolina, put forth an effort to reinvigorate downtown Durham by redeveloping the American Tobacco Company properties there into apartments, retail space and offices. The project, costing far more than its real market value, reportedly ended in bankruptcy. Now we learn there are troubling similarities with a project proposed for Indiana.

The  $260-million North Carolina project had roughly 1 million square feet of private office, retail and residential commercial property as well as two parking garages. The project used $100 million in New Markets Tax Credits, $43 million from the local governments of Durham (city and county) and a mix of state and federal historic tax credits.

Seven years after construction, however, the developers Struever Bros., Eccles & Rouse of Baltimore or (SBER), filed for bankruptcy relief according to the Commercial Property Executive, a magazine reporting on the finance, sustainability and legal issues of the commercial real estate industry

Since then, the properties that made up the bulk of the first $170-million phase of the project have traded hands (as recently as 2014) finally being repurchased by the instigator, Capitol Broadcasting, for $50 million, or less than one-third of the original financed costs, according to Durham County tax records. 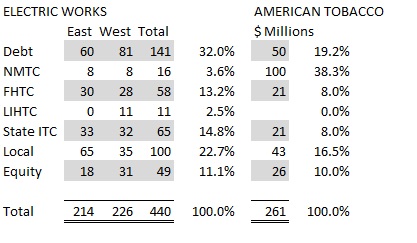 The Electric Works space should lease for $15 a square foot for Phase I, as confirmed by the developer’s representative at the Feb. 27 Fort Wayne City Council meeting. This should generate about $19 million in annual rental revenue with a net of $9.5 million assuming a generous 50 percent operating margin.

Using an industry standard, if you discount these cash flows in perpetuity at 6 percent (simply divide) you arrive at an estimated $157-million market value, a value similar to the developers’  estimate. In other words, the developer would be arranging $440 million of financing to build something that would be worth roughly a third of that. Once more, there is a similarity with the American Tobacco Campus.

Because Indiana state law protects the privacy of limited liability companies it is difficult to identify the true owner in these types of investments. If it were a private transaction that privacy would be acceptable as long as the participants agreed to the conditions. When public money is involved, however, a city council should be made aware of any conflicts of interest. In the case of the Electric Works, it is possible that hidden instigators or even government officials would be positioned to benefit directly. Here’s how that could happen:

Again, when private investors agree to such a deal, any loss is on them. But when an unknowing public is asked to pay for what amounts to a real estate scheme, fashioned in the dark, it should be a matter of serious concern and investigation.

Jason Arp, for nine years a trader in mortgaged-backed securities for Bank of America, represents the 4th District on the Fort Wayne City Council.

Full use of this site, including access to the search function and the archive of past articles and journals, is available only to paid members. Not registered? Join now!

Credentialed media and academics may request complimentary access by writing the director at director@inpolicy.org.