Anatomy of a Regional Cities Project, a Bad One

Editors: For immediate release (475 words). The table and chart below the column are source material indicating that the developer gets all of his $3.25 million “equity” returned at deal closing as a “development fee.”

In the town where I serve on city council we have had several “quality of place” projects come before us. These are real-estate developments that supposedly attract and retain young, talented workers. The theory is that by sprucing up our downtown we won’t lose young people to Chicago or New York. It isn’t working, and I suspect it isn’t working anywhere else in Indiana.

These projects have required escalating amounts of government funding and have shown little results considering that each subsequent project has required substantial subsidy from the taxpayer. All of them fit a pattern, but there is one project, “The Landing,” that is particularly egregious.

When completed, this project will have used $10 million of local money, $7 million of state money and $14 million in federal money to build apartments at $280,000 a piece (where the average home price is $100,000) that will rent for as much as $1,100 a month (two-thirds more than the average rent in the city). It will include thousands of square feet of commercial property to be offered at subsidized rates to compete with properties that are already struggling with occupancy.

The present value of the cash flows (the rents less expenses) of the development is worth $11 million (using a 6 percent discount rate), fully one-third of the stated construction costs and dollars “invested.” This is not in dispute, the developer says as much in his application for a Regional Cities grant: “Using comparable market data and standard underwriting assumptions, the project supports $7.67 million of debt and $3.25 million of equity at market rates of return.”

Most troubling, the developer appears to get all of his $3.25 million “equity” returned at deal closing as a “development fee.” The $20 million-plus in overpayment will go to inflated costs of design, construction and legal fees, since most of these contracts are estimated based on a percentage of the total project cost. In fact, there is an incentive to make these public-private partnerships economically infeasible, especially when most of the capital at stake is public money.

My concerns boil down to these: a) the layering of government subsidy: b) the obfuscation, with different presentations of the capital stack depending on which government authority was being addressed; and c) the apparent direct repayment to the developer (the sponsor) of all his capital contribution, a fact that debunked the claim that the public money was attracting private money.

All told, taxpayers will have paid three times what it will have been worth to construct this project, then have given it away to investors who will have no skin in the game while putting competitive pressure on surrounding property owners with their own money at stake.

This is no way to grow a city.

Jason Arp, a financial consultant, is the city councilman for Fort Wayne’s 4th District. This is a condensed version of an article written for the quarterly Indiana Policy Review.

Table I: Financing for ‘The Landing’ in millions of dollars. 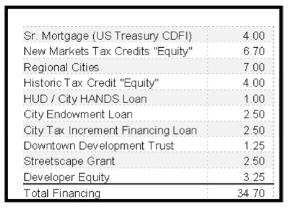 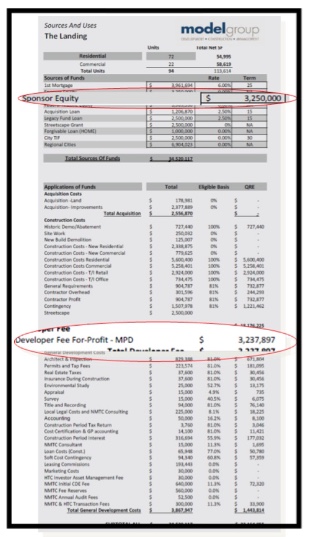