The Outstater: All the Sanctimony Fit to Print

(Not for publication; for the use of the membership only.)

A FEW DAYS AGO the top story on the front page of our morning newspaper was not the threat of a North Korean nuclear attack or the chaos in Washington. It wasn’t even the impact of increased state taxes on a dwindling middle class. No, it was that a black justice on the Indiana Supreme Court is retiring and it appears that his seat will not be filled by another black. “State’s Top Court Will Lack Diversity,” the headline read.

But the real news of the day was the decision to make that story the news of the day. It was
a decision born of lazy assumptions, all of them abusing the trust of a hapless readership, black or otherwise.

That a judge is retiring and the state’s merit selection system cannot find a politically correct nominee to replace him is not news but merely an observation, one that deserves to be on the editorial page where it can be fully discussed by all sides and the facts weighed, including that only about 1,000 of Indiana’s 15,000 practicing lawyers are “non white” and only two of the 21 who applied for the court vacancy are black. 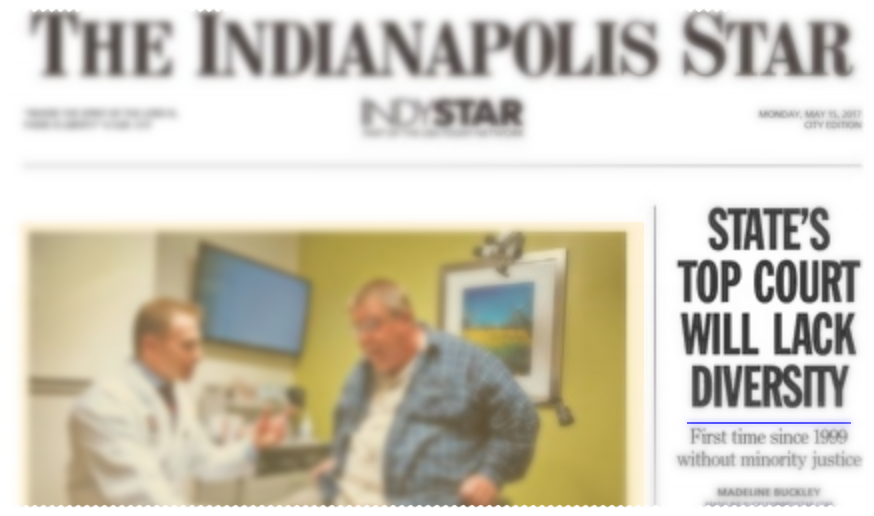 The high placement on a front page, however, implies something sinister, that someone is illegally blocking better qualified nominees because of a racist impulse. If true, that is indeed news and the investigative team at the newspaper had best get to the bottom of it right away. But nowhere in the story is that fear voiced let alone substantiated. Rather, it springs undocumented from the imagination of the assignment editor.

There was, of course, documented emotionalism in the form of hand-wringing by persons outside the process, some outside the tenets of Western Civilization entirely. “The (black) community has lost its voice,” one was quoted as saying as if the court were a legislature subject to the factionalism of a town council or any of the cruder democratic mechanisms.

The court is not so subject. Its raison d’être is to check the power of the other two branches through an independent reading of the Constitution, a wise but imperfect process described by the playwright David Mamet thus: “The Constitution, written by men with some experience of actual government, assumes that the chief executive will work to be king, the parliament will scheme to sell off the silverware, and the judiciary will consider itself Olympian and do everything it can to much improve (destroy) the work of the other two branches.”

Diversity? Who knows what that means anymore? It is a good guess that a DNA check of the sitting justices would find ancestry from not just one of the major divisions of humankind but dozens. And you can be sure that none shares the particular mix of the old white guy at the next desk (47 percent Western Europe, 16 percent Ireland, 13 percent Scandinavia, 7 percent Iberia, 7 percent Eastern Europe plus 5 percent Great Britain, a nation that itself is a mixing pot of indigenous and invading tribes and groups). Should he, too, demand precise numerical representation?

At bottom, what bothers the editor is the superficial appearance of the judges, that is, the color of their faces. That is a ridiculous position when nominating to a judicial body dealing entirely with ideas, a position that if carried to its extreme would recommend measuring skin tone, noses, eye placement, earlobes and such. All of that is easily managed, please know, through modern facial recognition algorithms that compare appearance values with templates to ensure variance or, in this case,  invariance.

And yet, there is a place where even superficial diversity would be meaningful. It is in the newsrooms, where familiarity with and acceptance by a city’s various communities is useful in the timely, insightful and accurate reporting of the day’s events.

It is indicative of failure in that regard that only two of the 20-plus reporters who covered the presidential campaign for the New York Times were black, none were Latino or Asian. “That’s less diversity than you’ll find in Donald Trump’s cabinet thus far,” noted one of the paper’s editors. And of the newspaper’s newly named White House reporting team, all six are white, as is most everyone in its Washington bureau

Industry wide, the Columbia Journalism Review reports that minorities made up 21.4 percent of graduates with degrees in journalism or communications between 2004 and 2014, but less than half of minority graduates found full-time jobs compared with two-thirds of white graduates.

So let the diversity axe fall if it must. Let’s begin, though, with the heads of sanctimonious editors who put nonsense at the top of their front page.