In 1975, Jessamyn West wrote a novel based on a true yet astonishing Indiana story. The Massacre at Fall Creek recounts the 1824 murders of nine Indians in Madison County and the ensuing trial and death sentences of the white male perpetrators. In the last chapter, a respected white preacher by the name of Caleb turned to his Native American acquaintances to reflect on the executions they witnessed:

“This will be remembered as a great day both for the red man and the white man. On this day for the first time, white men punished their own kind for killing Indians . . . Now we will live peacefully together.”

Caleb’s prediction, like West’s book, was fiction. The executions at Fall Creek were not long remembered nor did the case lead to lasting peace. It was a fleeting moment of frontier justice that received scant attention from legal scholars and historians.

Yet this is a story all Hoosiers should know because it reflects pioneer Indiana at its most enlightened. On the morning of March 22, 1824, a roving band of white men killed a peaceful clan of Seneca and Miami natives camped along Deer Lick Creek — a tributary of Fall Creek — near Pendleton.

Three of the victims were women and four were children. One of the men was a subordinate chief of the Seneca, “a person of great distinction and greatly esteemed among the Senecas,” according to Conner Prairie historians. The murderers presumed they could get away with their crime, a reasonable expectation considering cultural norms of the day.

Instead, they were hunted down by the citizens of Madison County. Although one suspect escaped, the others — James Hudson, Andrew Sawyer, John T. Bridge and his son, John Bridge — were charged, tried, convicted and given the death penalty. “It was perhaps,” writes Professor James H. Madison of Indiana University, “the first time in the history of the United States that the law worked with full recognition of Indian humanity.”

In his sentencing statement at the conclusion of Hudson’s trial, Judge William Wick expressed his outrage. “O my God! How could you do it?” he asked Hudson. “Did you persuade yourself that because he was an Indian it would be less criminal to take away his life than that of a white man?”

Hudson’s hanging took place on Jan. 12, 1825, the others’ on June 3, 1825. A huge crowd, including Indian chiefs in full dress, gathered around the falls at Fall Creek to watch. In a moment of high drama, Gov. J. Brown Ray came riding to the scene on horseback to pardon the youngest, 18-year-old John Bridge, because of his youth and ignorance.

Although justice had been served, the case set no enduring precedent, and, in coming decades, prejudice toward native peoples hardened. By the middle of the 19th century the stereotype — “the only good Indian is a dead Indian” — was an accepted attitude. It would be another 100 years before federal law recognized Native Americans as having full rights of U.S. citizens.

A stone marker in Falls Park, Pendleton, marks the spot of the executions. A state historical marker stands at the massacre site near Markleville. They are enduring symbols of a case that, for one shining moment, challenged and overcame prejudice on the Hoosier frontier.

Directions to Falls Park in Pendleton: From the South, take I-69 N to exit 19. Go east on Ind. 38 (State  Street) for two miles to the second stop light. Turn left on Pendleton Avenue. Park is two blocks north on right. From the North, take I-69 S to exit 22. Go left on Ind. 67 to Huntsville Road. Turn Right on Huntsville, which turns into Falls Park Drive. 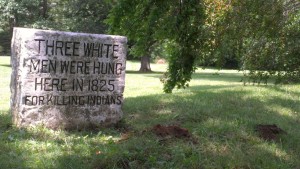 A stone marker bluntly states what happened at this spot along the banks of Fall Creek.

Full use of this site, including access to the search function and the archive of past articles and journals, is available only to paid members. Not registered? Join now!

Credentialed media and academics may request complimentary access by writing the director at director@inpolicy.org.